Yesterday was a special day as the old houseboat was moved into the dry dock and torn apart.  Mike and team did a brilliant job getting it there in one piece given the state of the vessel. 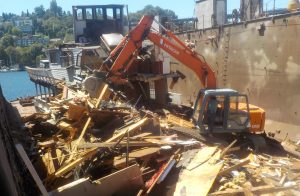 The machinery made quick work of ripping it apart.

Now we need to finalize the plans, get the appropriate approvals and commence building the new ‘Alice”.  It’s getting exciting!

The last couple of weeks has been busy on the dock with two houseboats returning from refurbishment and our neighbors have had a new son.  In anticipation of their new arrival, they had their houseboat remodeled to add another bedroom and generally update it.

I was fortunate to be home when the refurbished houseboat arrived back on the dock.  It’s very interesting to see how easily the two small tugboats maneuvered the houseboat into position given there wasn’t too much room to spare on either side.

The timing was also good as our neighbors had their new baby the day before and mother and son were returning that evening!

We’ve been very fortunate as Kate visited us for July 4th weekend and we enjoyed spending  another week or so with her.  Even though the weather wasn’t as nice as last year, we still had a great time enjoying a baseball game as well as the festivities and fireworks for Independence Day.

We braved the cooler, cloudy weather and went for multiple paddles.  Kate was very proficient on the kayak and as always I truly appreciate being able to get out on the water with a backdrop as pretty as the city of Seattle. 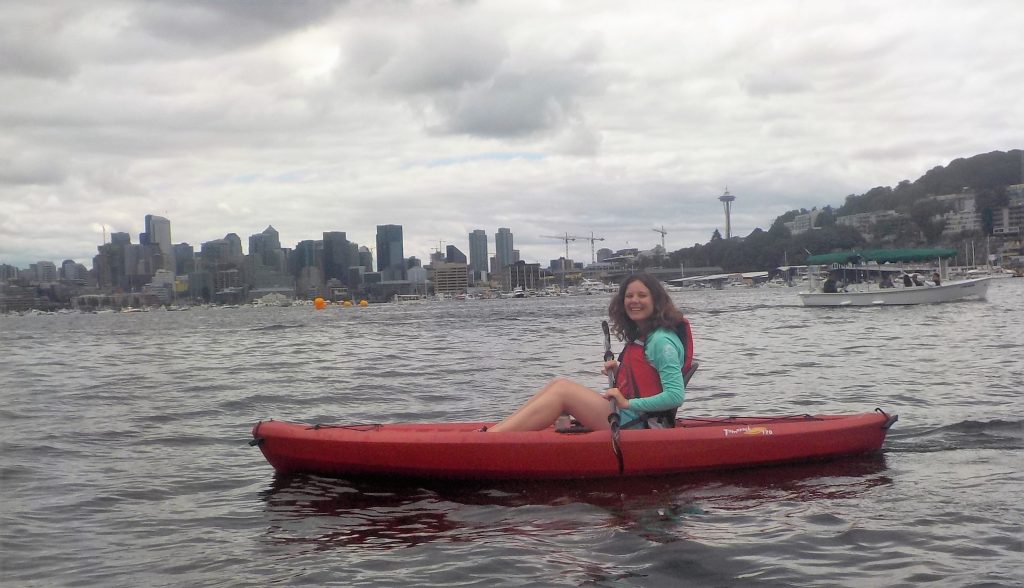 We also took out the KatieG to explore a little further afield, including checking in on the “Mad Max” barge that we bought in order to build the new houseboat.  We’re still waiting on a drydock opening so we can move it in and destroy it and in the meantime it’s very important that it remains safely floating in its mooring.

I introduced Kate to stand-up paddle boarding (SUP) and she put this new skill to good use by picking blackberries from the bushes near the dock. Then she practiced doing runs up and back in front of “Alice” and out to the lake.

Kate hadn’t visited Portland before so we made an overnight trip and had a great time, staying at the historic Benson hotel and visiting the local hotspots including the International Rose Test Garden, the Japanese Garden, the food truck area and the Willamette River waterfront.  Of course we also had to stop in at Voodoo donuts to bring home some samples including two “Voodoo Men”.

On the way back we called into Astoria – an historic logging town on the Columbia River that I enjoy a lot.  We climbed up the Astoria Column and had lunch at Coffee Girl on Pier 39.

We enjoyed our time so much we hope Kate can make it back next year and bring Adam with her!