On these summer weekends the rowing club dock gets a lot of visitors who sun bathe and take to water to swim, relax in water toys and generally have a chilled, fun time.  The dock also gets visitors in boats looking to drop off or pickup passengers, even though the rowing club actively discourages this practice.  Generally the boats that do this are smaller runabouts and sometimes slightly larger cabin cruisers.

This weekend was different.  A very large Chris-Craft, I’d estimate to be 65 feet long or larger attempted to drop off a wedding party for a celebration that was being held at the event center above the rowing club.  Needless to say this was never going to work, particularly given the large number of people on the dock and in the water near it.  They were shouting to these people to get out of the way.  After a little while, they abandoned the effort and moved onto the other rowing club dock, but there they only succeeded in causing damage to the locked gate.  Then they sent in a tender to do some reconnaissance, and finally they brought the large boat back in and tried to tie up behind the boats moored across the from us on the opposite dock.  This only succeeded in totally annoying all the owners of those moored boats how began yelling at them to “f*** off”, which eventually they did.  Not before multiple people had called the harbor police. 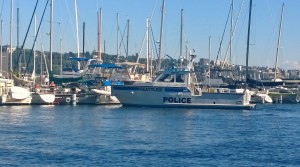 The Seattle water police showed up and spent some time getting details before heading off to track down the offenders.  I figured all they had to do was look for someone with a very big boat and a very small brain.

It seems that just like the Mounties, the Seattle water police always get their man.  An hour or so later the water police returned with the offender following them in his tender (in red Hawaiian shirt below).  Then followed by some lengthy discussions including with several moored boat owners and the police taking lengthy statements.  It was quite a while before the boat captain was allowed to leave, no doubt with one or more citations – a job well done! 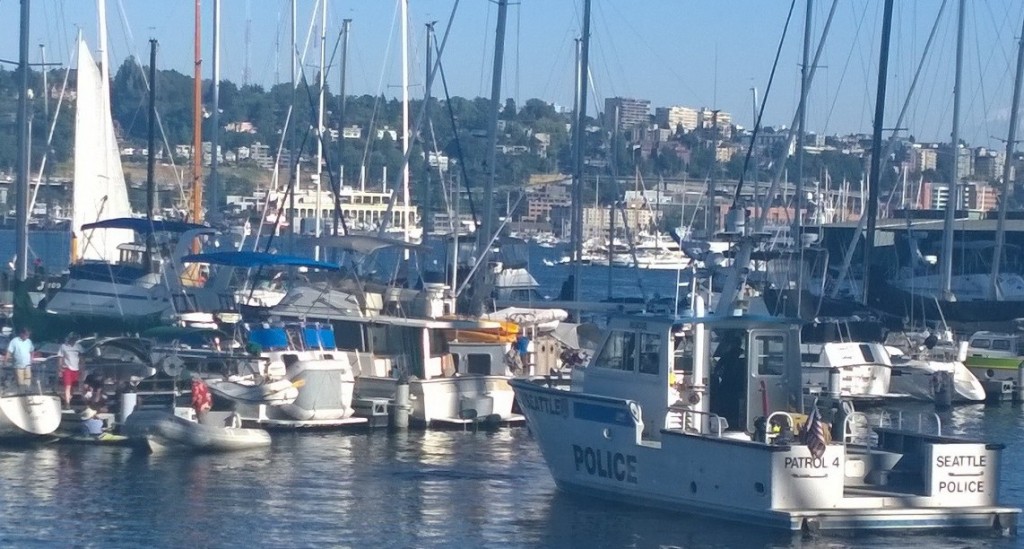 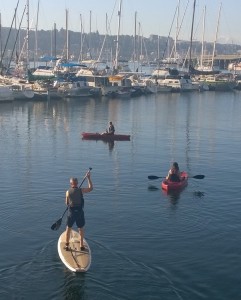 What a brilliant weekend.  Kate and Adam arrived on Friday and we spent the weekend partying in fine style.  Food, libations, water fun were all the order for the weekend.  We spent time on the kayaks, paddle boards, went out on the KatieG and watched the fireworks from the deck of Alice.

Lake Union gets truly crazy with boats as it is the one day of the year that boats are allowed to anchor.  The local park, Gas Works Park provides a great view of the fireworks display which is conducted from a barge anchored off the park, so of course that park was crowded with people who were entertained with music, food, displays etc. 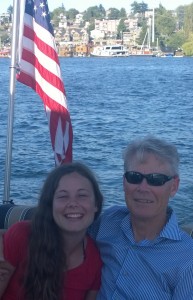 One highlight for us was to go out with our neighbors, Mike and Patti on their larger boat, Mischief and wind our way through the boats anchored all of which had some significant parties underway.

Then it was home to Alice to enjoy traditional July 4th hot dogs, burgers and beer as we waited for the fireworks to begin.