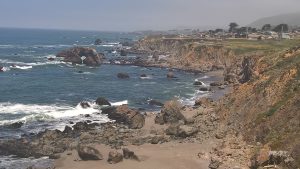 The continuation of my drive began with a fabulous drive up Highway 1 – the section from San Simeon to Big Sur was absolutely exceptional with some of the best ocean , cliff and beach scenery combined with some of the most exhilarating driving I have ever done.

What really surprised me was how vehicles kept pulling aside and off the road (this was mostly two-lane) to allow me through even though I was not being aggressive and kept a respectful distance behind them, although I must admit I came upon them quite fast.

Crossing the Golden Gate bridge was a wonderful treat on what was a sunny day.  If you’ve been to San Francisco on a sunny day, you know exactly how beautiful that city can be. I stayed the first night in Sausalito which is a very cool town on the water just across the bay from San Francisco. This town has a great feel and is full of restaurants, coffee shops, galleries and of course many boats in the marina.   In some ways it reminded me of where we once lived in Sydney with the convenience of being able to take a ferry across to the city. 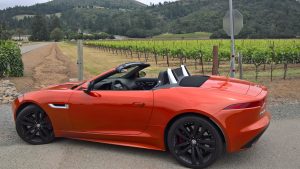 The next day I made the short trip to the Sonoma / Napa wine country.  This was a great change of pace and with truly beautiful countryside – there is something very calming about vineyards and the California countryside was still green from a reasonably wet winter.

I also had the opportunity to visit a few wineries and taste some great California wines – always a fun thing to do!

From there it was back to the coast through pretty dairy country to Bodega Bay and once again a fabulous drive up Highway 1 to Mendocino. Here I stayed in an older hotel that was being renovated but in a tremendous location on the coast overlooking wave-washed rocky outcrops that looked fabulous.

There are contenders for “Darwin Awards” everywhere and I had to take a photo of one who clearly ignored all warning signs re dangerous waves, slippery rocks and asking people to  stay behind the fence.

The next day was more tremendous driving up Highway 1 from Mendocino to Rockport.  I continued to be impressed with the courtesy of drivers pulling aside for me.

A little further on in Oregon I was on Highway 101 – a very pleasant, scenic drive that continues along the coast for the most part.  The Oregon coast changes from the rocky shores similar to northern California to broader, dark sandy beaches similar to southern Washington, but all were quite beautiful. 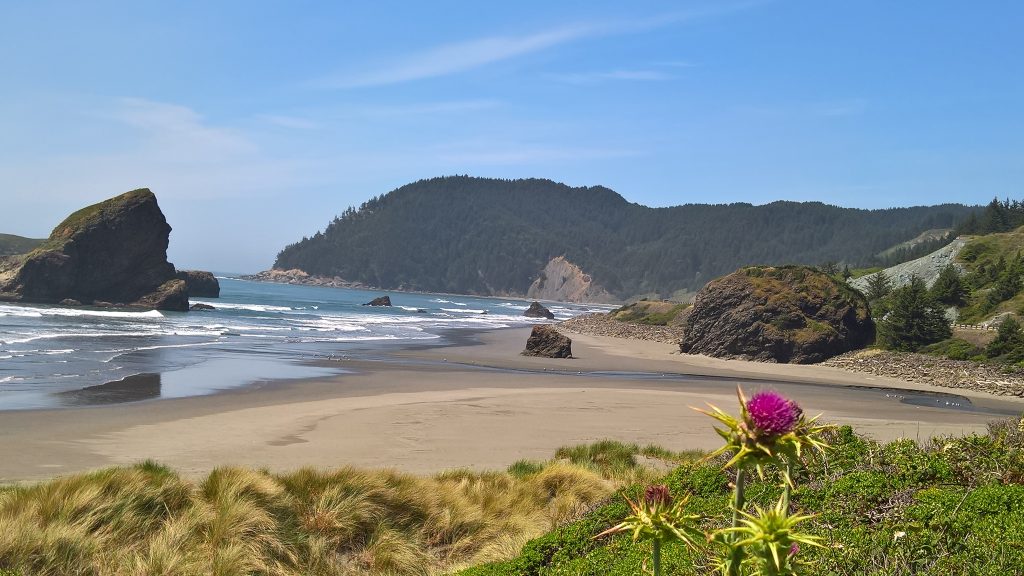 I was feeling pretty good about not having any incidents or tickets along my drive when I had my first potential encounter with Mr Plod about 1/3 up the Oregon Coast outside the town of Gold Beach.  I was in a 55mph zone on a two-lane road that was quite fun and I have to admit to being significantly over the suggested speed limit.  A police car came around the corner towards me so I hit the brakes, but as soon as we passed, he quickly flipped his car around and came up behind me, by which time I was below the speed limit.

While I waited for the blue and red lights and tried to appear very nonchalant looking at the scenery (the convertible top was down), the police car continued to follow me for several miles until we entered the town and the road became four lanes.  The police car pulled up beside me and the young policeman yelled out his window “Nice car!”.  I thanked him and he continued on his way while I then pulled over for a coffee and a snack to celebrate my luck.

I spent my last night on the road in Astoria in a hotel overlooking the marina.  Every time I go to Astoria, I feel I really should spend more time there as it has a great, friendly feel to it and is interesting with its maritime history, lots of shipping traffic and some great museums.

There is also the “original bridge to nowhere” that links Oregon and Washington.  This is a tremendous engineering feat and despite early derision, now carries a million vehicles a year. 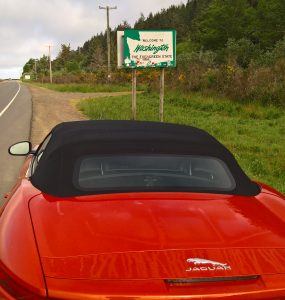 Then it was on into Washington and back home to Fremont in Seattle.  What an absolutely fabulous trip this has been.  I feel very refreshed and alive. 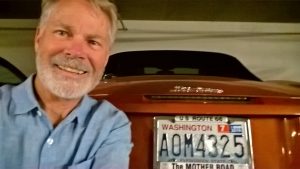 I had picked up a Route 66 number plate surround which the Jag now wears very proudly.

Once I dropped Alice in Phoenix, it was time for me to continue on the road trip – starting with an overnight stop outside Mesa at Saguaro Lake Guest Ranch where I saw the best starry night for a long time.

I was surprised by the number of mobile home communities along the Colorado River – some seemed to be retirement properties while others were holiday “resorts”.  I stopped to take photos and received this warning re rattlesnakes. 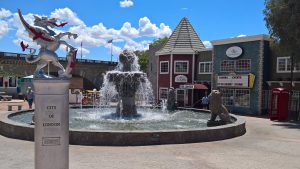 Then it was on to Laughlin NV for a night, with a detour through Lake Havasu City to check out the relocated London Bridge. 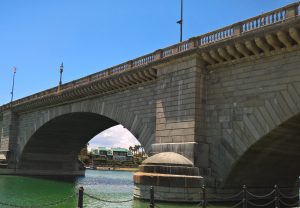 The area around the Bridge seemed like it had seen better days.

Laughlin is somewhere I probably don’t need to go back to – it makes Las Vegas and even Reno seem classy! 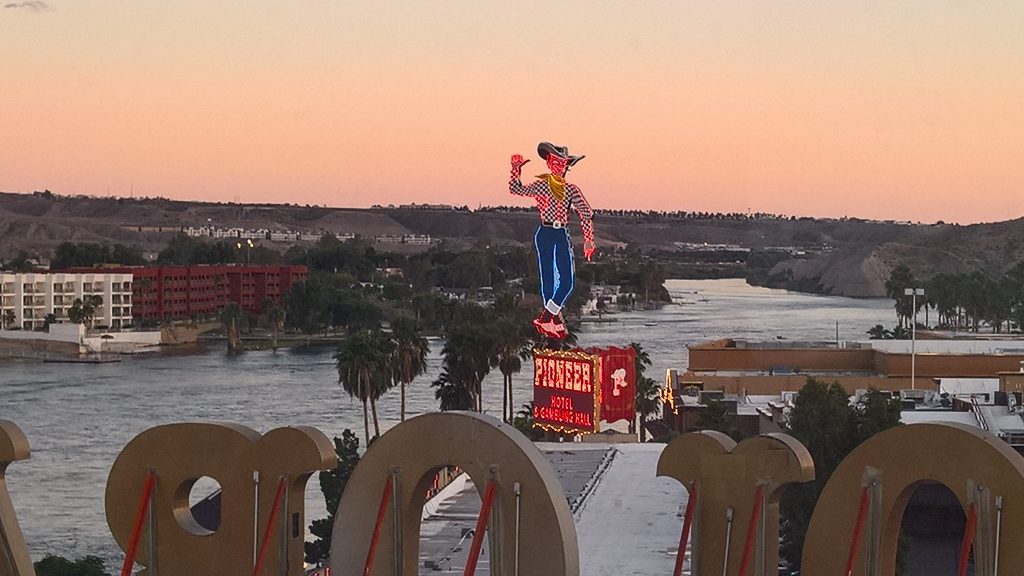 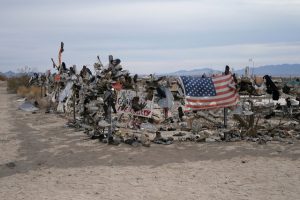 The next day I had a very interesting drive to Palm Springs.  About halfway along Hwy 62, there was a large collection of shoes on a fence near the town of Rice.  I’m not sure how it got started or the significance but it did add something of interest on the trip through the desert. 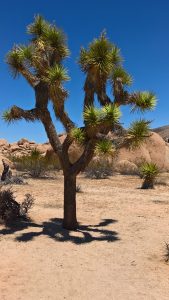 I made a detour through Joshua Tree park and the different vegetation was remarkable.  As the elevation increased and then decreased the desert landscape changed quite dramatically from spindly scrub to the Joshua Trees and to Octillo trees and back to scrubby desert. 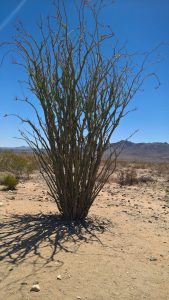 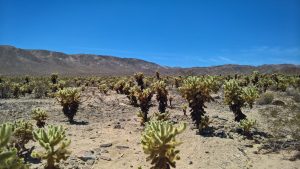 You get a real sense of the vastness of the USA when you see the desert stretching out for what seems forever. 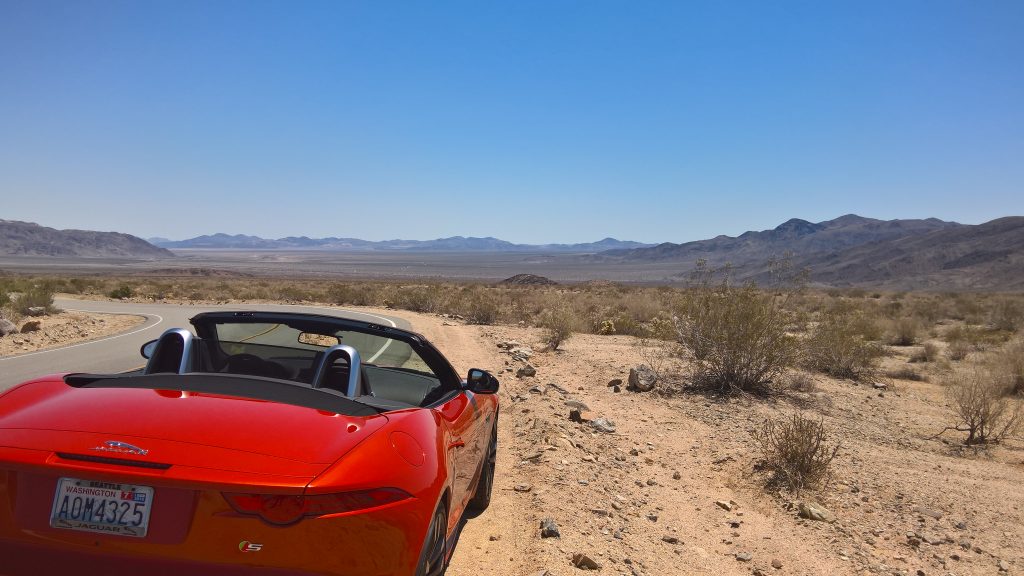 Once in Palm Springs I took the Ariel Tramway to get a bird’s eye view of the terrain.  It must have been quite a feat to build this in the early 60’s and it certainly gives a broad perspective of the desert towns in the Coachella valley. 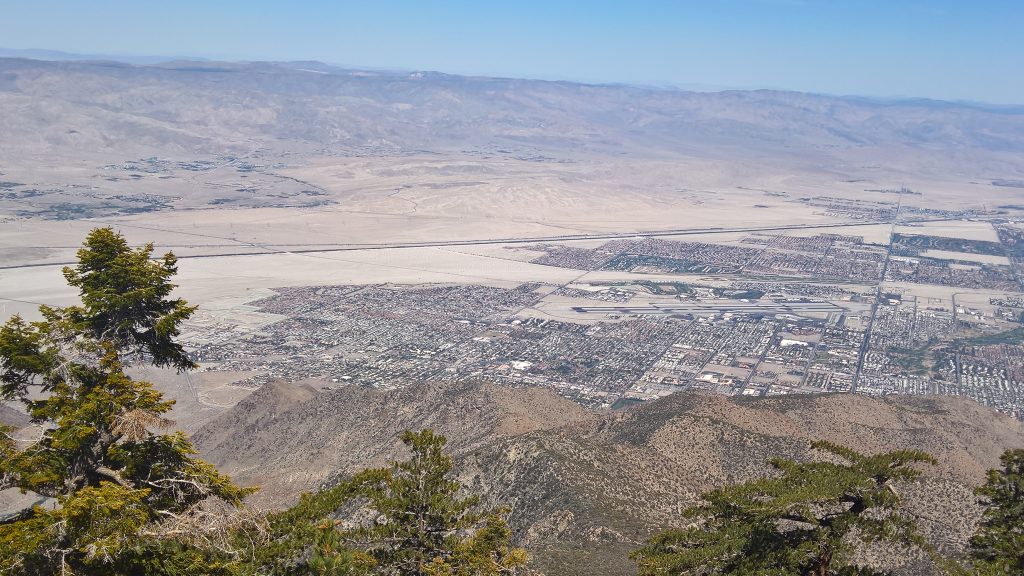 The following day it was a trip to San Diego where I stayed in the Gaslamp District and caught up with old friends. 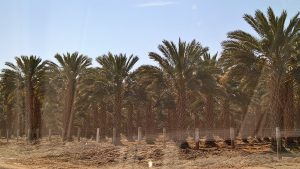 Along the way I saw the date palm tree plantations at Mecca which apparently were originally planted by Middle-Eastern immigrants and this has now become one of the largest date-producing areas in the US. 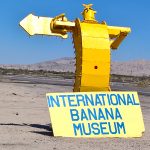 I stopped at the international banana museum as I had to take photo but I had no intention of visiting given my aversion to bananas! 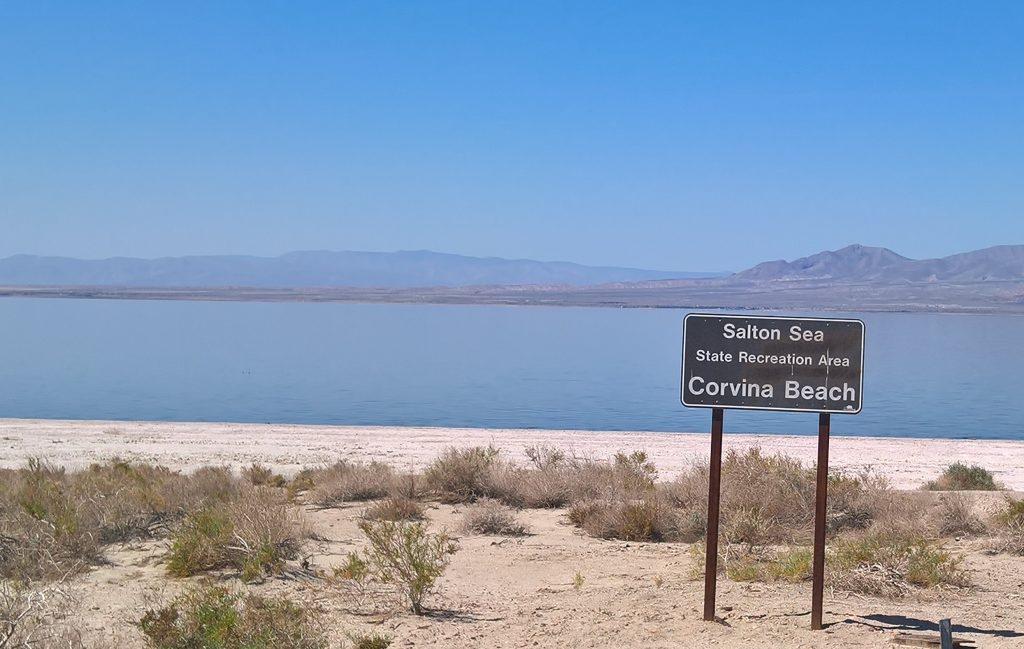 I also went past the Salton Sea – an amazing inland lake that is very large and the drive past it took a long time.

After spending a couple days in San Diego where I visited some of the museums in Balboa Park, it was time to start the next leg of my adventure up the Pacific Coast Highway (PCH) which is also named California Highway 1.

This is a fabulous drive along the coastline and I went through the beach towns including Laguna Beach, Newport Beach, Huntington Beach, Surfside, Redondo Beach and Manhattan Beach before skirting LAX airport and passing Santa Monica where Route 66 ends on the pier.  Of all the beaches I liked the feel of Laguna Beach best. 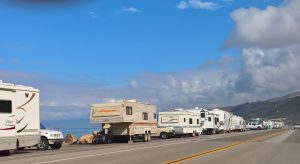 Along the way there was section of the PCH right on the ocean which had been made into a camping area for motorhomes – there was large number of them that must have went for a mile or two.

Next it was more touring north staying as much as possible on PCH, although I did have to go a little away from the coast on CA 101.  This was also interesting as it gave a great view of the rolling hills still green from winter rains and the extensive vineyards that have been planted along the California Central Coast.

I wanted to spend some time touring the Hearst Castle at San Simeon which was very worthwhile.  Not only did Randolph Hearst have a lot of money, he had a vision and the persistence to build this huge estate over around 30 years.  He collaborated with Julia Morgan on the project, the first women architect certified in California.

Apparently he entertained many Hollywood actors and producers along with other notable dignitaries and luminaries there through the 20’s and 30’s.

As you tour the grand rooms of the property you get a real appreciation of what it must have been like to be guest back then as the property has been very preserved including the original furniture.

After spending the night in a nearby hotel on the oceanfront, it will be time for me to head to Northern California.