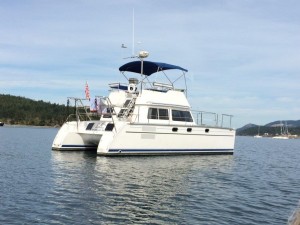 The last week was a great vacation in the San Juan Islands with our good friends, Peter and Nereis Long.  We chartered ‘Le Chateau’, a 35ft power catamaran with me as skipper and Peter as navigation and safety officer, Alice as the deck hand and tour guide and Nereis as the excellent chef – quite the crew! Each day we motored for 1-2 hours between islands and then had an adventure on arrival – hiking, exploring, shopping in harbors with shops and trying out the kayak.

We started out from Bellingham and went to Sucia Island on the first day where we picked up a mooring in Echo Bay.  Then it was off for a hike to Fossil Bay where we had no luck in finding a fossil, but the walk was still worthwhile. 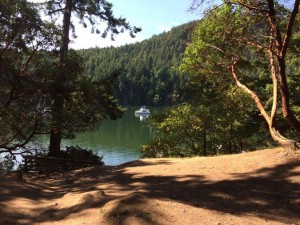 From Sucia it was off to Stuart Island where we again moored and then set off to explore the island and check out the Turn Point Lighthouse.  Along the way we found the school and museum and purchased some shirts from the treasure chest – a unique, honor-based approach to merchandising. The light house was very interesting and we had a tour of the lighthouse keeper’s house which was well done and very well maintained – the Park service along with the volunteers do a great job in presenting these national heritage sites. 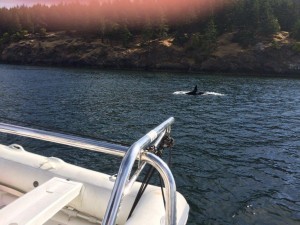 Then we went  to Roche Harbor but first did a detour to see if we could find some whales.  We were in luck!  We managed to come across a pod of Orcas as they travelled north.  We saw them coming so just put the engines in neutral and let them come to us – and what a show.  They were swimming within 100 yards of the boat and one even seemed to come towards us and then dive under the boat – just amazing!

In Roche Harbor we met up with our good friends and neighbors, Mike and Patti who had arrived on their boat the day before.  Mike had misheard me when I said I was getting a berth for a day in Roche Harbor and he thought it was my birthday.  So they had a gift and we all went off for a hilarious birthday dinner together with a birthday cake Mike had asked the wait staff to bring!   Best birthday ever and a total surprise! 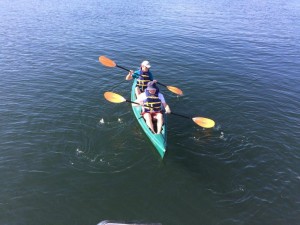 We then went to Shaw Island and anchored in Blind Bay.  Peter and I took the kayak we had rented out for a spin, very literally.  The thing kept wanting to turn right no matter which way we tried to paddle so it was quite the trek to get ashore and check out the general store.  Shaw Island has an interesting history as the general store, café and ferry dock had been run by nuns until a few years ago when they were getting a little old.

That evening there was a brilliant sunset. We returned to the general stored in the morning for espresso and pastries. After a lazy morning it was off to Orcas Island where I had reserved a dock at Rossario marina.

Rossario is a great old resort with a lot of history that illustrates the determination of individuals – in this case a Mr Moran who was a very successful ship builder and business man in Seattle who had fallen ill and was given 6 months to live.  He moved to Orcas Island and built his mansion in 1909 that is now the Rossario resort.  We arrived in time to take a hike up to Cascade Lake and then return to the mansion for the musical recital on the original organ and a 1900 Steinway piano accompanied by a slide show of original photos mostly taken by Mr Moran himself.  This was very well done. 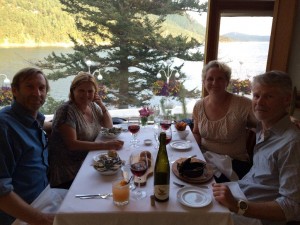 After washing up at the marina facilities (you don’t know the pleasure of a long hot shower until you’ve spent a few days on small boat with limited water), it was off to the mansion for a great dinner and a hilarious waiter from Ireland who bonded with us once he figured out (very quickly) we were Australian. 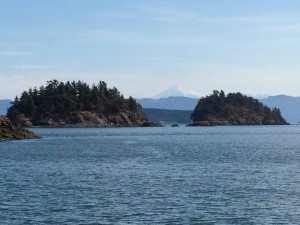 The next day, we motored to our last stop on Cypress Island and picked up a mooring in the very beautiful Eagle Harbor.  Then it was off for a hike past Duck Lake to Smuggler’s Cove where we learnt the story of Mrs Zoe Hardy who must have been quite the character.  We did see a couple of vultures but no eagles – we must have a been a few weeks too late for that. A final dinner on board and it was time to ge ourselves ready to return to civilization.

During our cruise we had seen harbor seals, sea lion, porpoise, whales, and a snake. We had brilliant weather all during the week but the weather was turning and it rained all through the night. The rain let up long enough the next morning for us to make a pleasant passage back to Bellingham and safe docking to end our adventure. Truly a most excellent week! 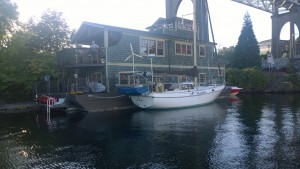 Today there was some movement on the dock.  As part of getting ready to rework the dock, the lease on one of the houseboats – the bright purple one – wasn’t renewed.  It had found a new location and it was time to move.  Moored in front of the purple houseboat was a sailboat which needed somewhere to stay on the day scheduled for the move.  The owner asked to dock it next to ‘Alice’ for the day which seemed an OK thing to do for a neighbor. 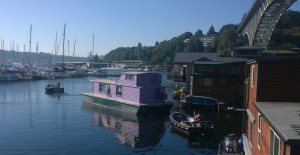 The move went mostly smoothly except that one the dock lines hadn’t been untied which caused a little consternation and a hurried stop to the proceedings while this was rectified.

Now I’m looking forward to see what transpires next with the dock moves.

It happened again! Last year we were surprised when large numbers of people descended on Fremont and after enquiring what they were doing, we were told about Geocaching – neither Alice nor I had heard about it before. To me it seems like hide and seek for adults using GPS devices to find hidden caches. 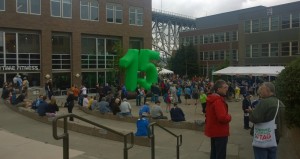 This year it was on again.  More than 4,000 people showed up – mostly geeky and not very fit looking but they all seemed to be having some fun.

I clearly don’t understand this activity as no one seemed in much of a hurry and were leisurely ambling around looking intently at their GPS units. 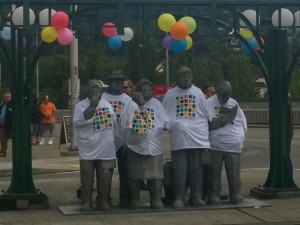 The Geocaching headquarters is in the building next to our houseboat and this year was their 15th anniversary so they went all out, including dressing up the statues “Waiting for the Interurban”.

Never a dull moment in the center of the universe 🙂

On Friday and again over the weekend we saw raccoons on the dock and on the edge of the water next to the dock in the morning.  Given they’re nocturnal, this is quite unusual.  At first I figured they want to eat the blackberries that grow on the bank next to ‘Alice’ but that didn’t explain why they were pouncing into the water.  Then I realized they were catching and eating some of the smaller fish we have that swim around the houseboats. 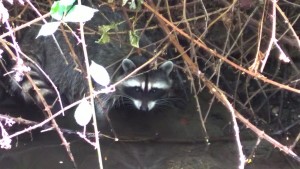 The water is incredibly clear at the moment so it must make it easier for the raccoons to see the fish.  I’m learning more about raccoons – they remain creepy looking but if they are fishermen they can’t be all bad!

Alice and I took a long weekend and headed off down the Oregon coast for a road trip to Redding where her aunt’s memorial service was being held.  Although the reason for the trip was sad, it was nevertheless an enjoyable journey.  We headed off after work on Thursday and stayed at a hotel on the river in Portland.  Then it was off to the Oregon coast stopping in Newport for lunch and then on to Eureka California where we stayed at the Carter House Inn – a great bed and breakfast.

The Oregon coast road is spectacular in places and the driving was very enjoyable – the Jag finally got to stretch its legs on a proper driving road.

They were filming a movie in Eureka supposedly starring Kirsten Dunst so we’ll have to keep an eye out for it.  It was at night so not sure if it’s a scary movie but as we were leaving early the next morning, there seemed to be some scary people hanging around so you never know.

The memorial services was fitting and most of Alice’s family had gathered so it was good to catch up over the celebration, dinner and breakfast. 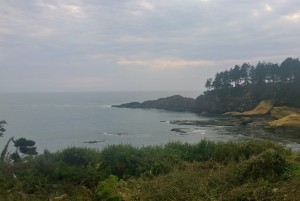 Afterwards we set off again up the coast and stopped in Depoe Bay for the night – again staying at a bed and breakfast and had dinner at Tidal Raves which was a great recommendation from the inn keeper.  Here is the view from the restaurant.

The Jag performed very well and enjoyed the run, although it now needs a bath. 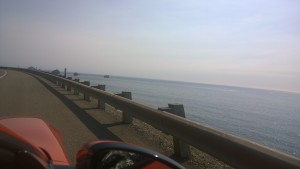