July 4th was the Centennial of the opening of the Ballard Locks and the ship canal that connects Lake Union and Lake Washington to the Puget Sound. This was quite the engineering feat 100 years ago and it still gets significant vessel traffic due to the Fisherman’s Terminal for the Washington/Alaska fishing fleet as well as the dry docks, shipyards and of course many pleasure craft.  The Fremont Bridge supposedly holds the record as the bridge in America that opens most often, as I’m sure many commuters will attest.

Today was an additional celebration with a historic boat parade to re-enact the original boat parade when the ship canal was first opened.  There were more than forty historic craft taking part as well as a fire boat, tug boats and other assorted vessels. 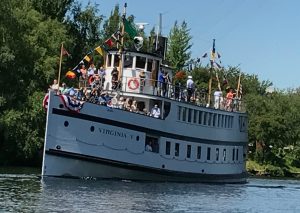 The Virginia V proudly blew it’s whistle as it came past where I was sitting.  This is part of the historic boat display on Lake Union near the MOHAI museum.

The Lotus which is normally a floating hotel in South Lake Union was also in the parade and I didn’t know it was still operational.

There were also a number of Lake Union Dreamboats in the parade – these were a unique design built in the mid-1920s at a shipyard in Lake Union.

Our neighbors Bob and Cathy were out in their small wooden boat ‘Olive Oyl’ – and of course with their dog Stella. 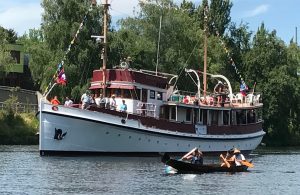 The parade also included a small traditional canoe with some Native Americans who were singing loudly and very well. 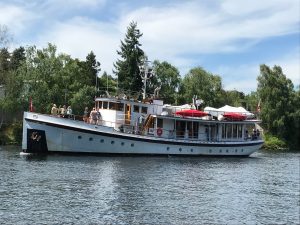 There were also quite a number of other boat styles represented – but all looked very classy! 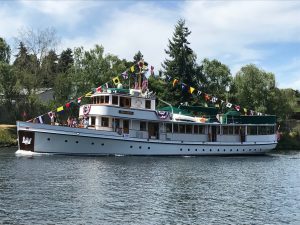 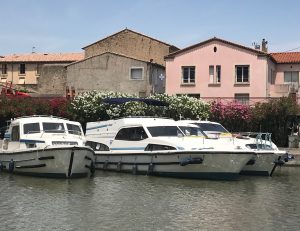 After our previous boating adventure  we had all agreed to do another boat trip and we decided to charter a boat to travel on the Canal du Midi in France.  The date was set and then Kate and Adam decided their wedding date and so it became a “Familymoon” for the newly weds (although they did manage a few days in Paris before joining us).  Our neighbors, Mike and Patti also chartered a boat at the same time so it was quite a party trip. 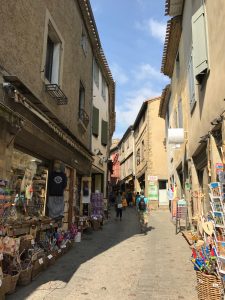 We traveled about 37 miles and traversed about 30 locks some of which were double locks and there were two triple locks.  Our boat was quite comfortable with three cabins and heads and the much needed air conditioning as the weather was unseasonably hot for the time of year – around 95F most days!

Everyone got on splendidly and there was great teamwork in the locks.  We dubbed Kate the “Lady of the Locks” and subsequently promoted her to be the “Queen of the locks” given how adept she was at catching the lines, placing them around a bollard and passing them back.  She was also brilliant at working the automated locks in the first two canals.

After Kate helped us with our lines, she scurried around the other side of the lock to do the same for Mike and Patti, although at times Luke also jumped off to assist – including one time he grabbed the ladder in the lock and climbed up as we sailed by it earning him the name of “Ladder Luke”.

Adam and Grant were great handling the lines while the locks were filling and the team effort made the locks rather easy for us – other boats were having some difficulties entering, leaving or maintaining their positions during the lock operation.

We had some fabulous meals and all appreciated the quality of French wines.  We also enjoyed the early morning forays to the bakery or boulangerie to get the breakfast pastries – we became experts at Pain au chocolat!

We also had some unexpected treats – such as when Grant and Luke found “le Bar” – the only place open on a Sunday afternoon.  This reminded us of some older hotels in Australia – it was hot, the noisy ceiling fans were doing their best to cool things down, the beer was cold and there was even a dog in the bar!

We ate a lot of cheese, Grant of course went for the unusual and ordered frog’s legs and we all managed to eat a lot of canard.  I think the ducks knew and they surrounded the boat when Adam went to take a walk!

Given how hot the weather was, we made a stop at one of the few places with a swimming hole (the canal was definitely not clean enough to enter the water and survive!) and we also had a great afternoon at the lake near Homps.

After we dropped the boat off in Trebbes we had one more day and evening together in Carcassonne. 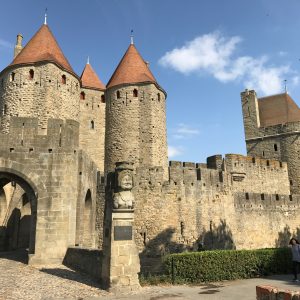 This is a truly fabulous old medieval city with a very large restored castle.  Our last evening here was memorable and then we all departed on the same train, although Alice and I were headed home, Grant and Luke were going to spend some time in Paris, and Kate and Adam were headed to Amsterdam after an evening in Paris.

It was another very memorable trip and now we’re already planning our next adventure together!

It has to be one of the greatest events for a Dad – the wedding of a daughter.  I was no exception and the wedding weekend was an emotional and very happy occasion for everyone involved.  Kate and Adam were looking very happy and very much in love the entire weekend and Grant and Luke arrived from Australia to join in the celebration. 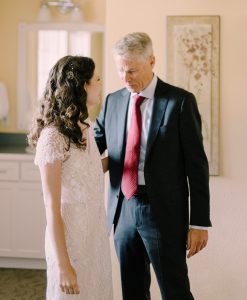 Having the bridal party in Mission House and the rest of our family and friends in cabins at Chautauqua made it a very special time.  Alice and Kate had a very special time getting ready on the morning of the wedding and I have to say it was a very memorable moment for me as well when I first saw Kate in her wedding dress. 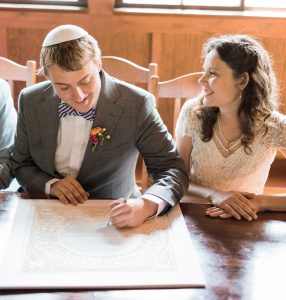 The ceremony itself was very special with the signing of the Ketubah (I guess in times of old, Adam and I would have signed after first having negotiated how many cows and camels I would receive in exchange). 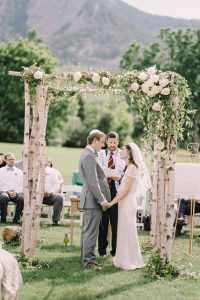 Then it was off to the outdoor ceremony under the Chuppah with the magnificent backdrop of the Flatirons.

After Adam successfully broke the glass with the accompanying “Mazel Tof”, it was off to the reception at the art-deco Boulder Theater. 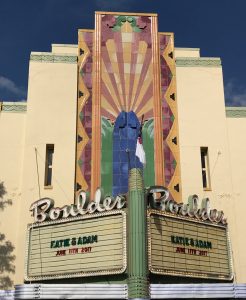 After cocktail hour, Kate and Adam had their first dance, I welcomed the guests and made a toast, Adam responded and then  it was time for food, drink and dancing. 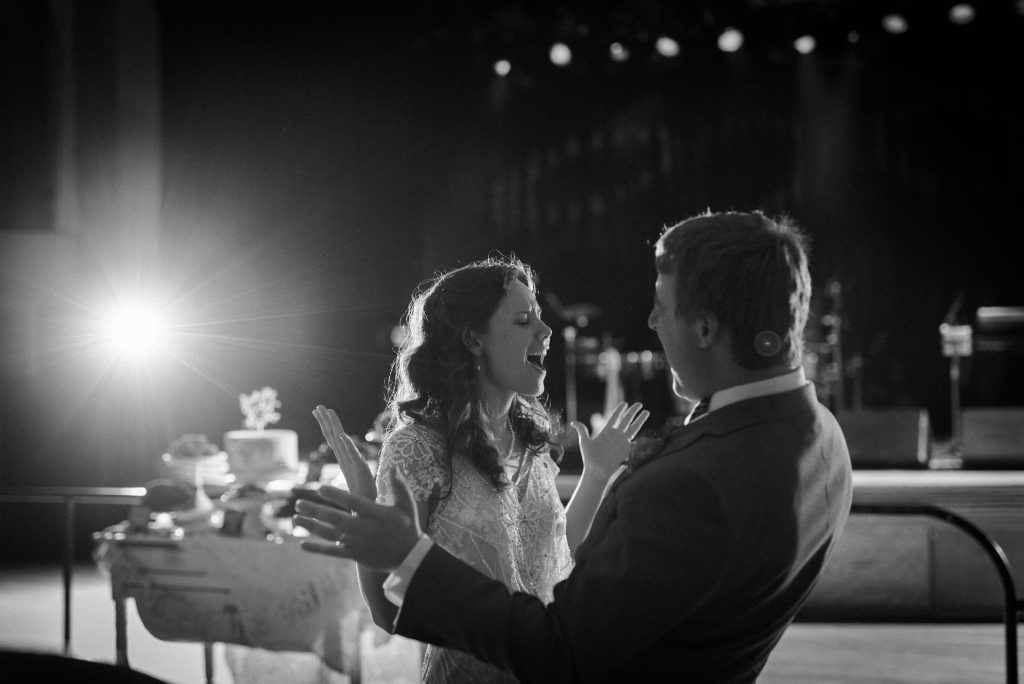 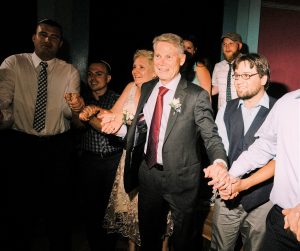 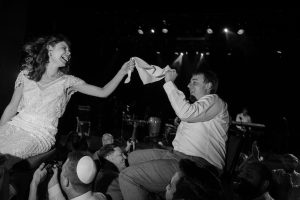 One highlight was the Horah – Adam and Kate both managed to stay on the chairs, although we had strategically positioned Grant on one of Kate’s chair legs just in case! 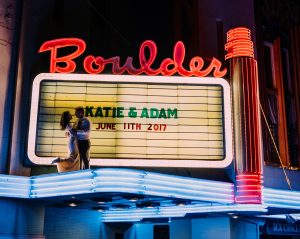 During the evening, Adam and Kate managed to break away and climb onto the theater marquee for some photos.

We closed the theater down on the dance floor with the band sayin “Best. Wedding. Ever”.  Such a great event and wonderful memories for us all.