Another beautiful weekend in Seattle.  On Saturday the weather was sunny and warm ~ 85F so it was time to get on the water. I went out on the paddle board accompanied by Alice on a kayak.  It felt great until a tow-person rowing scull ran me down on the way back.  It’s a little disconcerting to look down and see the bow of another boat right along side of and moving much quicker.   Needless to say I ended in the water with quite a bruise where an oar hit my ankle.  Afterwards we went out on the KatieG for a three hour cruise – and made it back safely 🙂 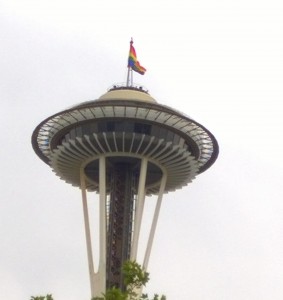 Sunday was cooler with cloud cover which was a good thing as Alice and I marched on the Gay Pride Parade in Seattle.  It was a very festive event attended by lots of people representing all aspects of society and a very large number of spectators.  There were many rainbow flags flying including on top of the Space Needle.  It was all the more of a celebration following the Supreme Court decision to make same-sex marriage legal in all 50 states.  As they say, Loves Wins! 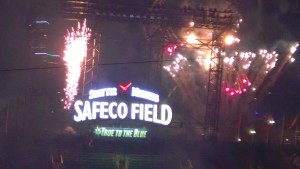 It’s been an action-packed weekend in Fremont with the annual Solstice Fair and parade. We started the weekend by attending as Mariner’s game in which they beat the Astros from Houston. This was followed by a fireworks display that had a Star Wars theme.

On Saturday we visited the Solstice Fair, checking out the arts and street vendors. Among other things, there was an art car display and Alice really liked the witch’s car from Nebraska. Then on to the Solstice parade, which as per tradition started with a naked bicyclist parade – this year there must have been more than 1,000 of all shapes, sizes and ages, most of whom must have spent considerable time on their body paint.

Then off to Woodinville to watch a concert by Chicago on the grounds of the Chateau Ste Michelle winery.

All in all a fabulous weekend. 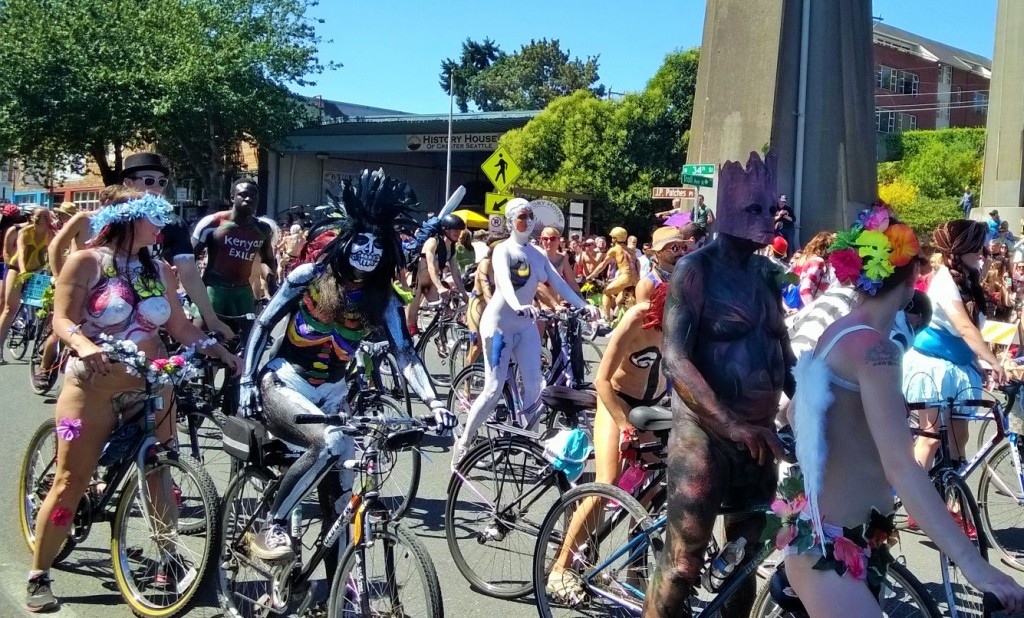 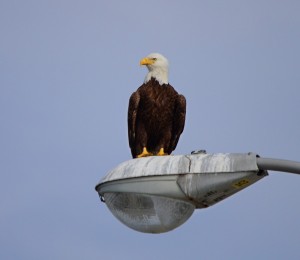 Most mornings as I head over 520 bridge on my way to work, I see a bald eagle who like to hang out on a lamppost on the bridge. Occasionally I get to see him soaring or in action hunting his prey – mostly later in the afternoon / early evening on my way home. He really is majestic and Alice who also gets to see him on her way to work has named him Buddy – I’m not sure why but it seems to work. 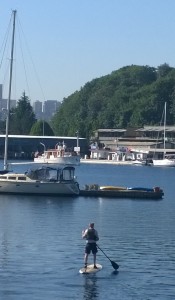 This week I’ve finally had the time and the nice weather to become better acquainted with my paddle board – a Jimmy Styks Scout expedition. The first day out (staying near our dock and doing large loops) was a bit of a shaky start, although I’m proud to say I didn’t fall in. Since then I’ve gone a little further each day and today I managed about a 75 minute run. Again a little shaky but getting stronger and bit more confident. No falling in which is a great thing although I’ll admit to having to go down on my knees when a cabin cruiser whose operator doesn’t know the meaning of “no wake zone” came a little close 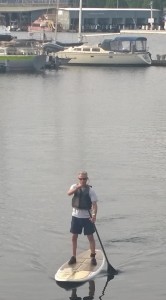 I had a real workout getting back as the wind had come up quite strongly and of course I was paddling against it – at times I was either stationary or even losing some ground. Still I now understand why I’ve been told that SUP paddle boards provide a full-body workout and are great for core muscles.   As is always the case, now that I’m back and relaxing on the deck of Alice, the wind has dropped and all is calm 🙂

After a few weeks of business travel each week (Johannesburg, London, New York) it was great to have a relatively quiet week followed by a long weekend for Memorial Day. Alice and I are getting away to Oregon. We’ll stay in Portland and then in the Willamette Valley to do a little wine tasting. As fun as these will be, Alice is most looking forward to stopping in Olympia on the way home to pick up our new cat, Josie.

Great time tasting wine in the Willamette valley. Then we picked up Josie on the way home. Of course she was screaming for a good part of the trip. And then once we got home, Alice put her in the litter box and we both went about our business putting items away after our trip. Then Alice couldn’t find her so we spent 30 minutes or so crawling all over the houseboat including in the hull as I had the door open while I was putting the wine down there. So just as we were about to crawl all the way through the hull, Alice too another look in the litter box and there she was – hiding behind some empty plastic bags. Alice was much relieved but my first thought was that it was time from a glass of wine! 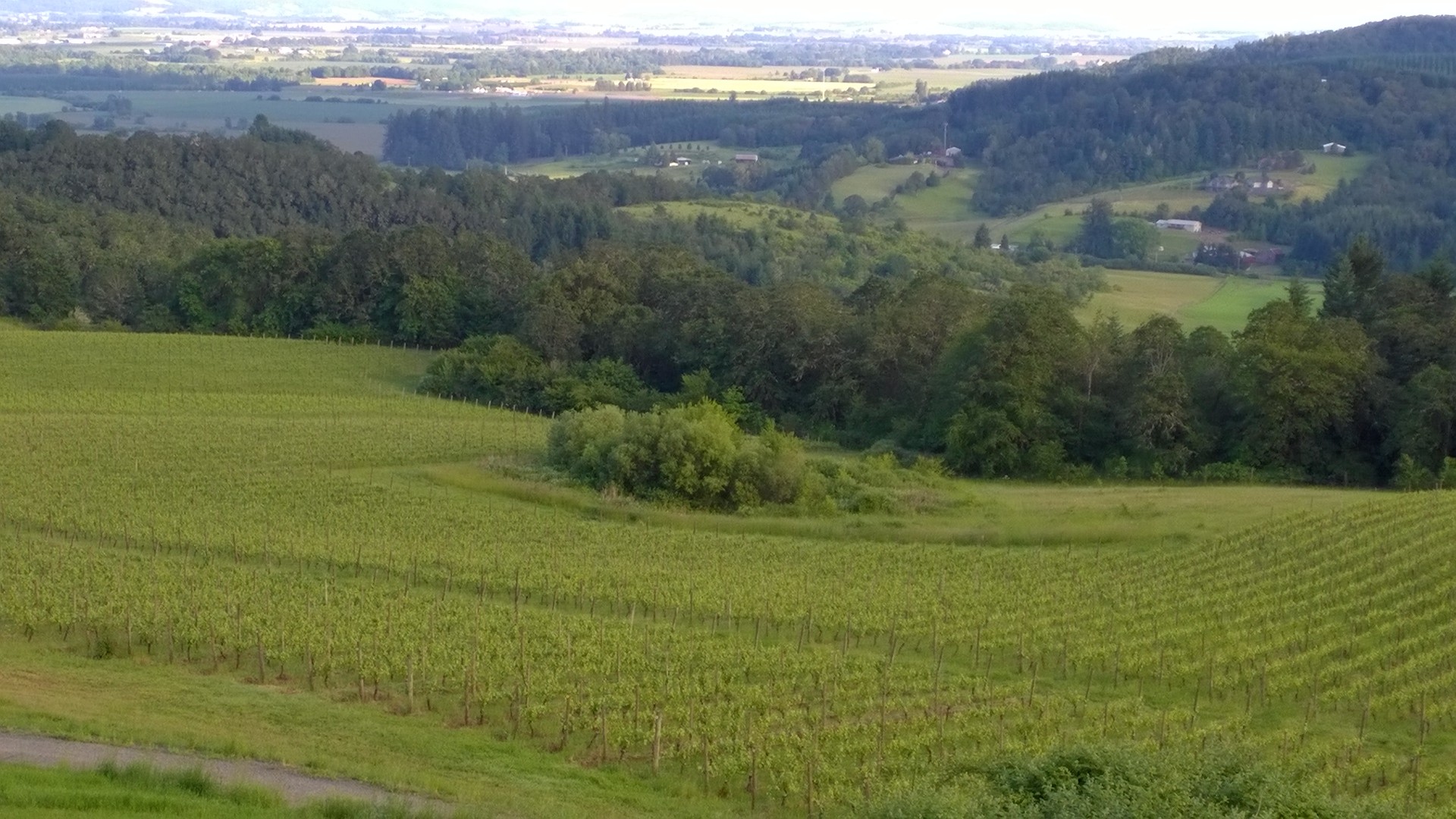 Last night we had our second set of uninvited guests for the year. At least these well less nefarious than the last set who stole my Cruzbike – a recumbent, front-wheel drive bike that will be expensive to replace. Following this we had some motion detectors and lights to shine on the dock beside our houseboat and on to the deck near the KatieG.

Last night around 2:30am, Alice awoke with a start to say there was someone on the deck of the houseboat. She ran upstairs, while I ran along the side deck to cut them off if they tried to escape back down the stairs. It was a drunken young couple who were happily sitting in our deck chairs. Alice gave them quite a talking to ands I reiterated her lecture with a few choice swear words as they were leaving down the stairs, quite chagrinned.

Afterwards we decided we did a couple of things wrong in the heat of the moment. Alice should have had picked up her phone to call the police, we should have turned on the outside lights and next time I’ll pick up the baseball bat and take that with me. We will also need to adjust the motion detectors and lights or add some more.

This is the time year when the days are getting quite long, the weather is becoming more beautiful each week and nature is coming alive.   There are many birds singing each morning and the trees are all flowering (with a lot of pollen in the air). The Canadian Geese are back on their way north to return home, but many have stopped long enough in the Seattle area to have young ones. It always surprises me how small, yellow and fluffy they are. The other morning a family swam by ‘Alice’ dutifully watched by our gargoyle, Dido as shown below. 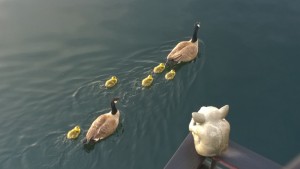 There is always something happening on Lake Union and Lake Washington and today even more so as the boating season officially opens. This day was made even more special because of the clear sky, shining sun and relatively warm weather. 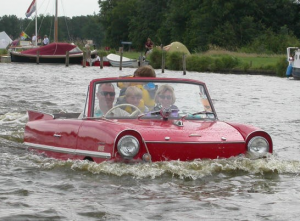 I went for a paddle on one of the kayaks and amongst the usual sightings of boats, seaplanes, stand-up paddle boarders, kayakers, sailors and such I also had two remarkable new sights. The first was a pair of Canadian Geese with three yellow fluffy goslings in tow all going for a swim and the second was the very unusual sight of three amphibicars out in the middle of Lake Union, dodging boats and the converted army ducks that are now used for sightseeing tours. 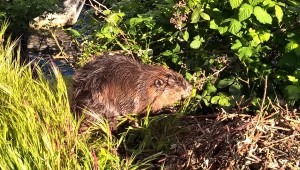 This afternoon I went for a walk along the Burke Gilman trail and as I was walking back and close to home, there Justin was, living up to his rock start image. I wondered why a number of people had stopped beside the trail and some were taking photos. As I got closer, the reason became clear. There was Justin, larger than life right beside the trail making a meal out of some bushes.

So naturally I had to join and take a photo as well – after all I didn’t want him to think I was dissing him!

On a beautiful Saturday in Seattle we took our new boat out for the first time. After packing some snacks, filling the water the tank and putting some necessary supplies on board we were off on our first adventure. Getting away for the mooring next to ‘Alice’ was relatively straightforward and we made our way to the fuel station for our initial filling of the fuel tank. This all went relatively smoothly so the adventure now began in earnest.

A nice slow trip across to Lake Union, stopping a couple times to admire other houseboats and floating homes and we were through the cutting between Lake Union and Lake Washington. Between seaplanes, Coast Guard, Police boats, wake boarders, kayaks there was plenty of activity on the lake. We had a great time trying out different speeds in between my practicing maneuvering the boat at slow speeds. Then it was Kate’s turn…

It was hilarious as she practiced turning the boat and then trying to keep the boat heading in one direction while countering the wind and waves. All in a totally brilliant day for us all!