This year the Solstice festival in Fremont coincided with the Father’s Day weekend.  We had a brilliant time starting with an early morning kayak on Saturday followed by the Solstice Parade.

As usual it was led off by many naked cyclists – perhaps 1,000 or more.  Most wore colorful body paint, some didn’t bother and some should have stayed home. 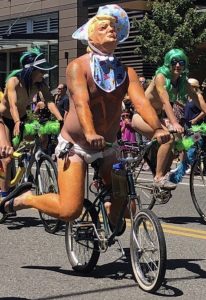 Two highlights was the “Baby Trump” and the full size horse bicycle.  Both very elaborate.

Following the cyclists, the parade took the streets through Fremont with a variety of floats, some making political statements, some just for fun and all quite colorful and full of happy people. 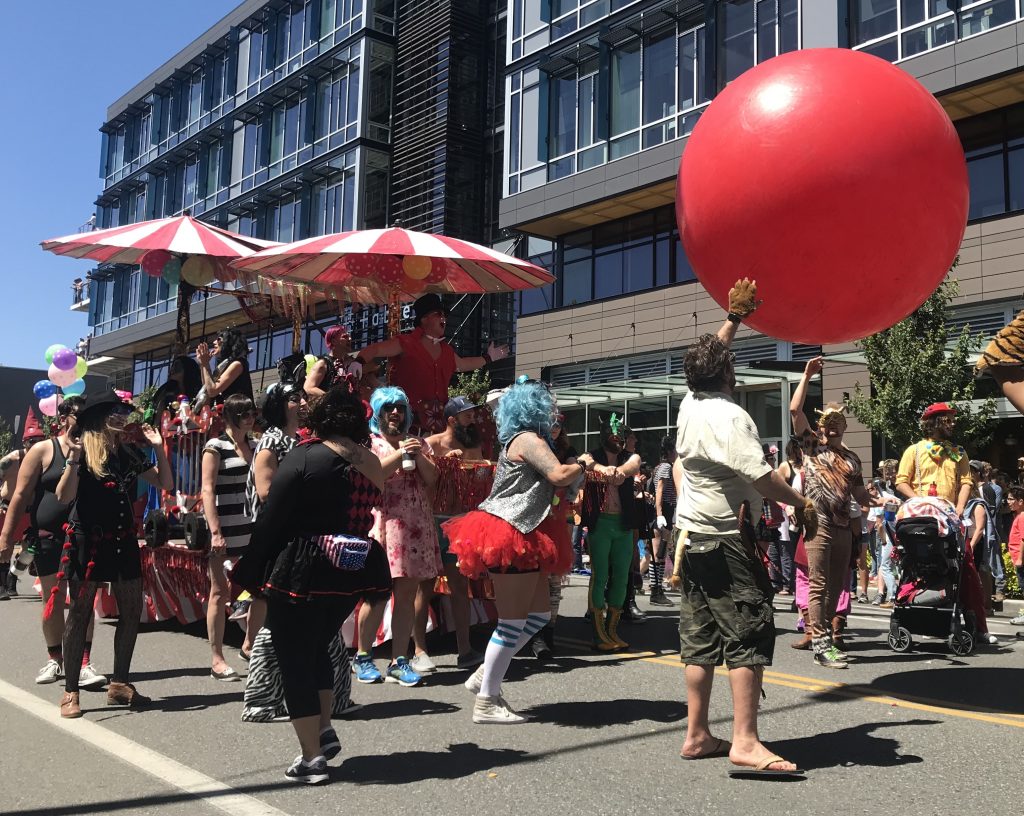 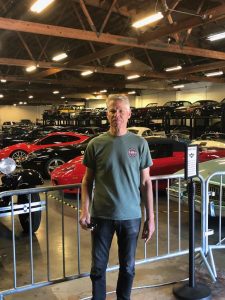 On Sunday we took advantage of absolutely beautiful weather to go for another kayak.  Afterwards Alice took me to brunch at Derby a restaurant at “The Shop” a club for car lovers where they can leave their specialty cars and work on them using lifts, tools and local experts. 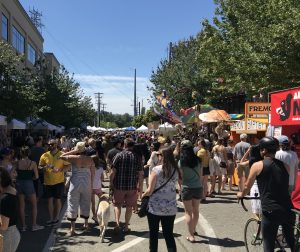 Then it was time to check out the festival.  It was packed with people enjoying the fine weather.There are many stalls selling a wide range of crafts, plenty of food trucks and stalls, a couple of beer gardens and two stages with live music. 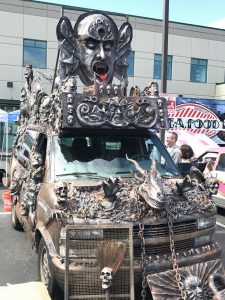 There was also an “art car” display and we figured this took the prize for the creepiest vehicle. 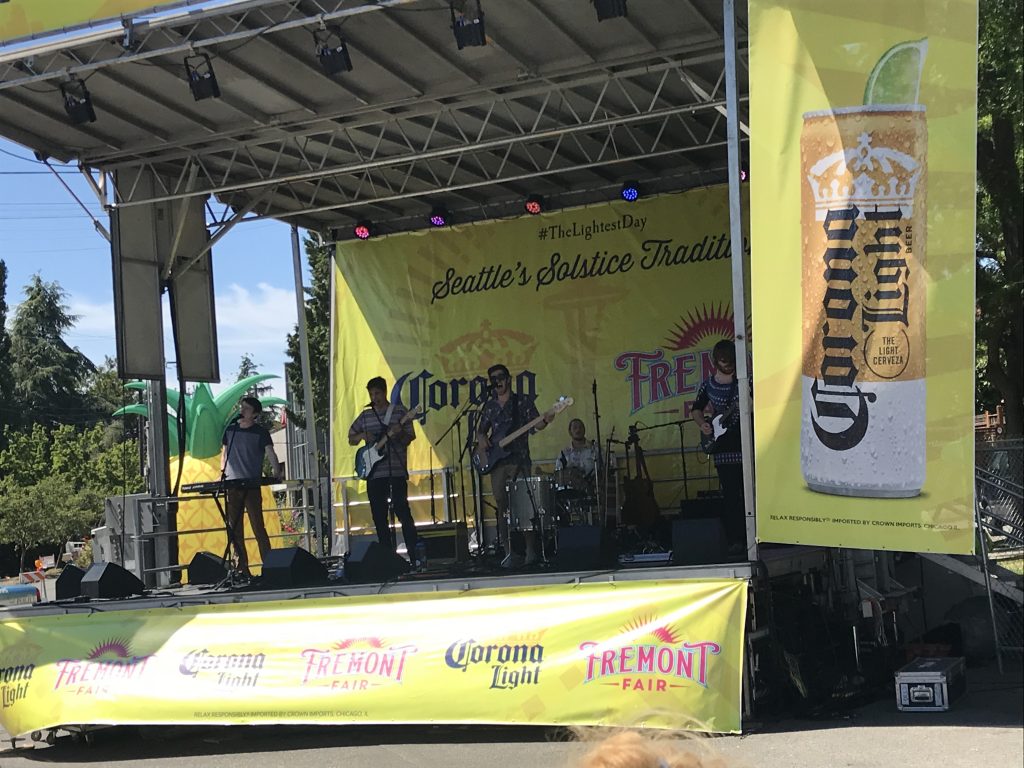 All in it was a great weekend, and a wonderful way to celebrate Father’s Day.

It’s been a very interesting few weeks.  myDIALS was a software company which I co-founded with Peter Long, a former colleague, way back towards the end of 2006.  It was acquired by Adaptive Insights in 2012 and we all retained stock in the parent company.  Adaptive had planned to IPO on the New York Stock Exchange this Thursday June 14th, which was interesting enough, but today Workday announced it was acquiring Adaptive for $1.55 billion in cash!  This results in a great outcome for everyone who was part of the myDIALS journey and essentially closes that chapter.  This makes it a good time to look back and reflect.

myDIALS Inc was incorporated in Colorado as the headquarters followed by myDIALS Pty Ltd in Australia as a wholly-owned subsidiary of myDIALS Inc. Product development would be performed in Australia.

It was an interesting journey with a lot of truly great memories, many high points and  some character building moments when the situation was quite bleak (it’s not easy when you’re concerned about making payroll for the people who trusted you and left secure jobs to join the crazy startup world).

I’m proud of what we built together and very honored and humbled to have had the opportunity to work with very talented architects and engineers who built an excellent product that was appreciated by our customers and the people who used myDIALS in their daily work lives. I’m also grateful for our sales people who found the customers and for our professional services and customer success team who ensured customers received value and were happy with the results.

Many of the myDIALS team continue to be part of Adaptive Insights and I’m very pleased that the Australian development center continues to grow and prosper.

The vast majority of startups fail (around 90% according to Forbes) so it’s very gratifying that together we achieved a good outcome for employees, customers, partners and investors.  I have a lot of people to thank and be grateful for, and have reached out separately to each of them.  I shared with them a short story describing the initial founding and early years, and my recollections from that time.

This experience reinforced for me that to survive in the startup world, you definitely need a willingness to take risks, and the ability to overcome rejection and learn from it, as well as courage, determination and above all perseverance. It helps if you have a good sense of humor, and it certainly doesn’t hurt to be just a little crazy!

It’s not every day you wake up to find a sailboat had drifted down past Alice during the night and is laying untethered between the rowing dock and the KatieG. 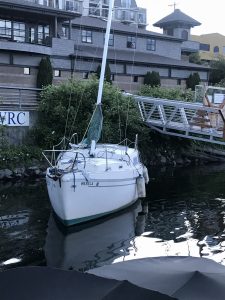 It turns out there was someone on it, and when I went and spoke to him he had quite the tale about just getting his boat out of impound and that someone must have untied his boat from the dock where he was squatting sometime during the night.  I’m just very grateful that the boat didn’t hit Alice or KatieG as it drifted by.

He said he was having trouble with his outboard motor and that he had his phone charging at a local cafe and just needed twenty minutes or so before he’d be on his way.  The guy then tied up to the rowing club dock which of course the rowers didn’t take too kindly to. 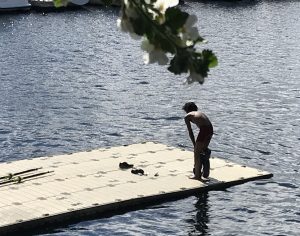 He decided to go swimming so hopped on the dock, stripped off to his underwear and jumped in the lake.  He swam across to Alice and climbed up onto our deck.  I told him he couldn’t be there and to swim back to the dock and put his clothes back on.  He was nice enough and did exactly that.

After a while the  Seattle Police Harbor Patrol showed up and a lengthy discussion ensued.  He must have explained that his outboard motor was having problems and at one point he requested and the police gave him a large hammer, which he proceeded to hit the motor with but to no avail. 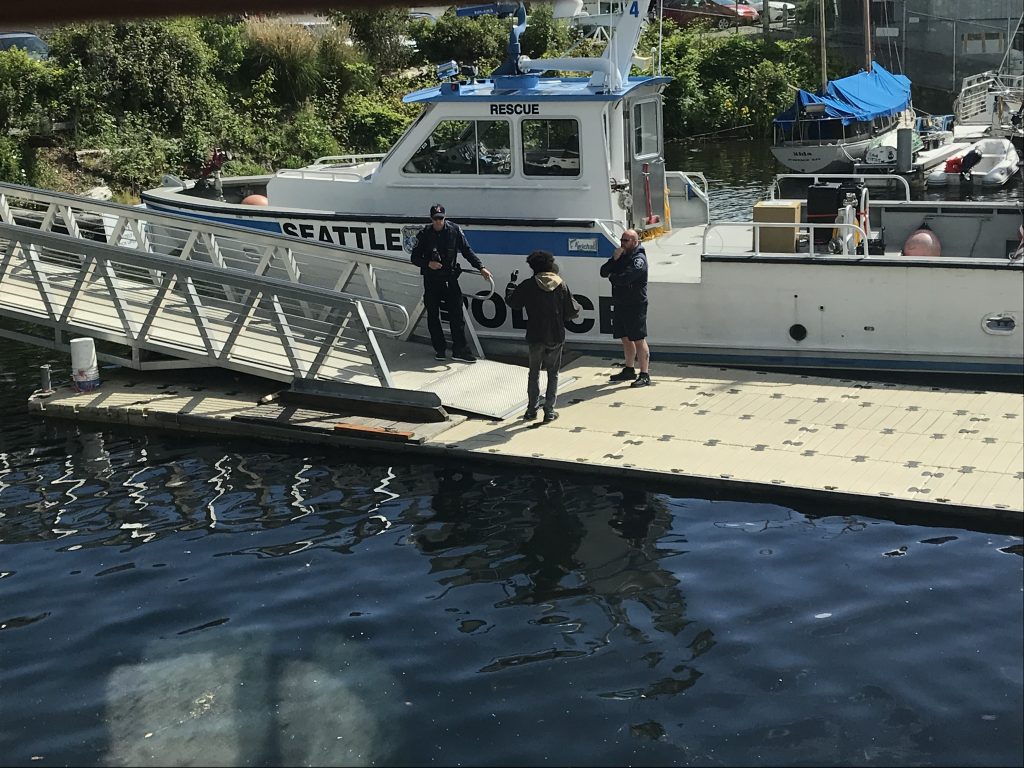 After some more lengthy discussions the Harbor Patrol decided to move him on. 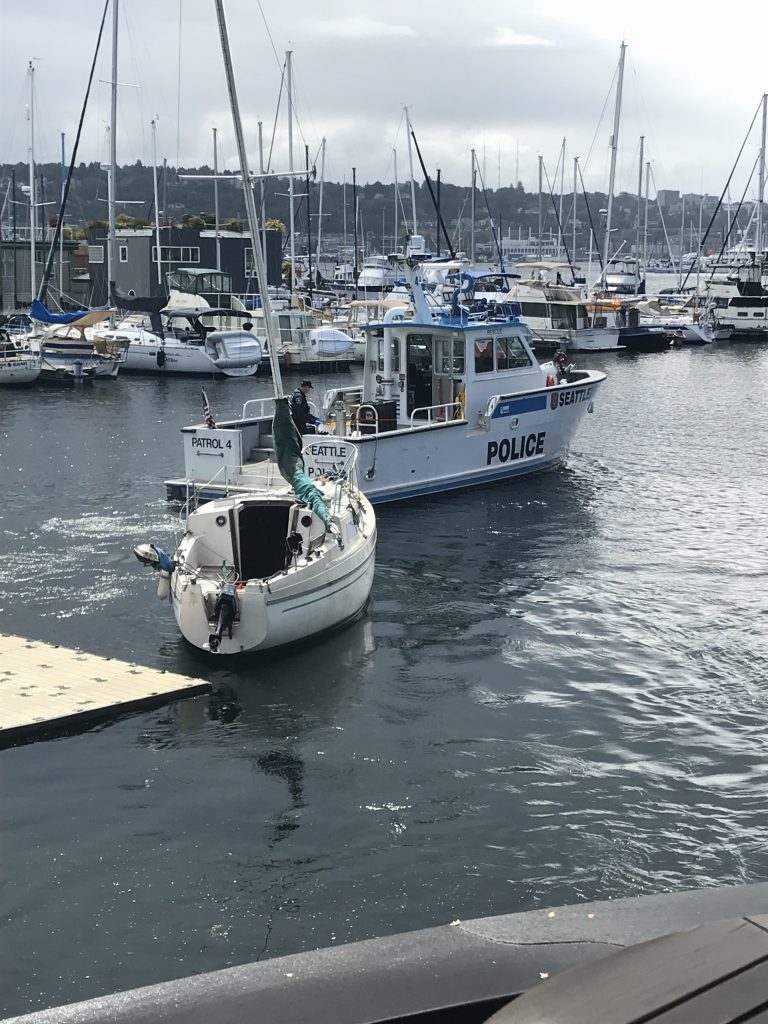 This resulted in even more drama when the tow rope became loose and the sailboat headed for Bob and Cathy’s houseboat.  The police managed to get it back under control and moved him out into the lake.

Sometime in this process the guy managed to get the outboard running so the police cut him loose and he headed towards the ship canal.  Of course he couldn’t signal the Fremont bridge to open, so the police did this for him.  While he was waiting he had difficulty controlling the boat so he tied up to the pilings close to the bridge. 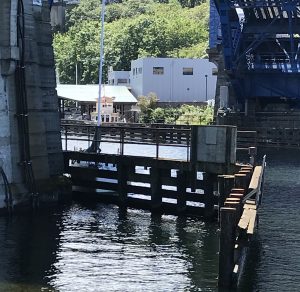 After the bridge opened, the guy still seemed to be having some issues as he went under the bridge sideways, before seeming to get everything under control.

The last I saw of him, the guy was motoring down the canal waving to other boaters as he passed.  I sure hope he is safe and finds somewhere to tie up.  He certainly had a most interesting start to his day!